Taiwan speaks of ‘rock solid’ ties with US 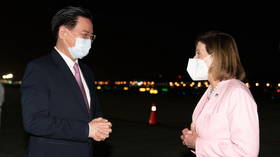 Taiwan “wholeheartedly” welcomed US House Speaker Nancy Pelosi after her plane touched down in Taipei on Tuesday, according to an official statement by Taiwan’s Ministry of Foreign Affairs.

According to the foreign ministry, the high-level delegation highlights the “rock-solid” support the US Congress has for Taiwan and the “extensive cooperation in various fields” between the two countries.

The statement also noted that this was the highest-level US delegation to Taiwan in 25 years and expressed hope that Taiwan and the United States would “further deepen” their cooperation.

Pelosi herself released a statement after touching down in Taipei, saying her visit honors Washington’s “unwavering commitment” to the self-ruled island. 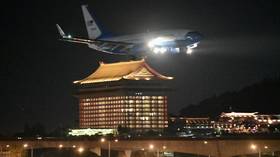 The Asia trip – which includes stops in Singapore, Malaysia, South Korea, and Japan – comes despite serious warnings from Beijing, which considers Taiwan part of its territory under the ‘One China’ policy recognized by the United States.

Pelosi claims her trip in “no way contradicts” Washington’s long-standing policy on Taiwan and is aimed at “reaffirming our support for our partner and on promoting our shared interests, including advancing a free and open Indo-Pacific region.”

In an official statement, the Chinese Foreign Ministry called Pelosi’s presence on the island a “serious violation of the one-China principle” that “undermines peace and stability across the Taiwan Strait.”

Pelosi is the first speaker of the US House of Representatives to visit Taiwan in over two decades. Taiwan, which officially calls itself the Republic of China (ROC), has been self-ruled since the 1940s but has never officially declared independence from Beijing.