Explosions were heard over the Syrian capital in early hours of Wednesday, as Damascus accused Tel Aviv of another attack 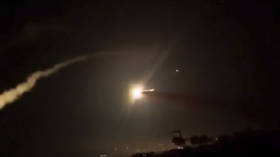 Multiple explosions were heard over Damascus shortly before 1 am local time on Wednesday, with the Syrian media accusing Israel of yet another missile attack. Tel Aviv has not officially commented on the claim, but Israel has repeatedly attacked what it said were Iranian “assets” inside Syria, claiming pre-emptive self-defense.

Syrian air defenses were confronting “Israeli aggression” in the skies over Damascus, the state news agency SANA reported on Wednesday. No further details were immediately available.

There were unconfirmed reports that at least half a dozen missiles had been fired into Syrian territory, and at least two got through the air defenses. A “big explosion” was reported in the rural area of the Damascus province, northwest of the capital.

The Israel Defense Force (IDF) has not officially acknowledged the attack. However, Tel Aviv rarely does so, and has maintained it has the right to bomb Syria in self-defense, citing the Iranian military presence in the neighboring country. Damascus has condemned these attacks as acts of aggression and violations of Syrian sovereignty.

Israel War Room, a nonprofit based in the US, said that the Israeli aviation was “engaging in targeted defensive airstrikes against Iranian assets in and around Damascus,” adding that Israel “has the right to defend its borders against a buildup of Iranian military hardware and proxy terrorists.” 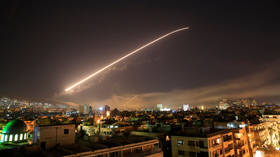 Tehran and the Shia Hezbollah militia have both backed the Syrian government against Islamic State (IS, formerly ISIS) and Turkish-backed jihadists affiliated with Al-Qaeda, which have sought to overthrow the government in Damascus since 2011.

With Syria operating a number of Russian air defense systems, Israeli jets usually fire missiles from Lebanese airspace, or launch them from their positions in the disputed Golan Heights.