Bern is losing its integrity by succumbing to foreign pressure and joining anti-Russian sanctions, an initiative group warns 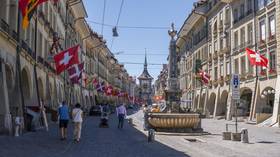 Switzerland should return to its policy of “complete neutrality” lest it lose its international clout and the right to act as a mediator, an initiative group called Pro Schweiz (For Switzerland) has warned. The group has called for a referendum on a constitutional amendment that would bar Bern from joining military alliances or sanctions regimes.

The group was formed in October and supported by former Swiss police and justice minister Christoph Blocher, who said Bern’s move to join anti-Russia sanctions over its military campaign in Ukraine was harming its international standing as a mediator.

“After just a week of pressure and criticism from the outside, Switzerland has already caved in and imposed sanctions [against Russia],” Blocher said in mid-October while presenting the Neutrality Initiative. A nation cannot join a sanctions regime and seek to act as an international mediator at the same time, he argued. Switzerland has maintained strict neutrality since the early 19th century.

The group slammed the government for “untruthfulness, hypocrisy, scapegoating, and smug distinctions between ‘good guys’ and ‘bad guys’.” The Neutrality Initiative is aimed at ensuring “that Switzerland’s independence and neutrality is not undermined by an ideology-driven and hypocritical foreign policy.” 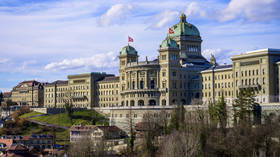 The constitutional amendments suggested by the group involve declaring “perpetual” neutrality and refusing to join any military alliances unless Switzerland is directly invaded or faces an imminent invasion.

Switzerland should also be barred from taking “non-military coercive measures against belligerent states.” Instead, the nation should officially declare its readiness to act as a mediator in any conflict, the initiative says.

The Swiss government has so far not reacted to the Pro Schweiz suggestions. Some Western media outlets, including Reuters, described the group as linked to “nationalist” and “right-wing” forces such as Blocher’s Swiss People’s Party.

In October, the Swiss government – the Federal Council – declared in a report that sanctions against Russia were in line with the nation’s neutrality policy. “Neutrality doesn’t mean indifference in the face of fundamental international law violations,” it said at the time.

Earlier, Swiss President Ignazio Cassis, who is also the foreign minister, spoke of “cooperative neutrality” during the World Economic Forum in Davos. This led some to question whether Bern was about to redefine its neutrality.