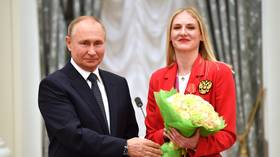 Svetlana Romashina, the most decorated synchronized swimmer in Olympic history, has said that Russian swimmers stand a decent chance of appearing at the Paris 2024 Games despite warnings that they could be prevented from competing at qualifying events.

International Olympic Committee (IOC) official Craig Reedie said earlier this month that he considered it likely that Russian and Belarusian athletes would not be cleared in time for the qualifying cycle in various sports because of bans imposed in the wake of the military campaign in Ukraine.

Global swimming authority FINA is among the federations to have imposed a blanket ban on Russians, forcing them to miss events such as the World Aquatics Championships held in Budapest from June 17 to July 3.

But speaking on her own career plans as well as the hopes of Russian swimmers and the Paris Games, Romashina noted that FINA had at moved its World Championships in Qatar to February of 2024, in what has been described as the result of scheduling issues stemming from the pandemic.

The decision moves the showpiece to a date much closer to the Olympics, and where qualifying opportunities would be provided for those competing.

“I already had such thoughts [about ending my career] even when the Tokyo Olympics were postponed. Even then we were in an absolutely suspended state, we didn’t know whether the Games would take place or not,” Romashina,32, said on Sunday in comments shared by TASS.

“Now the situation is even more complicated, but in water sports in general – despite the fact that FINA decided to remove Russian athletes from the World Championships, they postponed the qualification selection to 2024, as close to the Olympic Games as possible.

“I think this is so that the strongest Russian athletes have the opportunity to qualify. It could be considered as a good sign.” 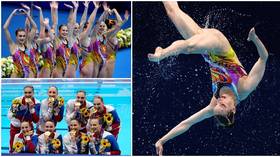 Romashina picked up another two gold medals at the Tokyo Games, taking her Olympic haul to seven – which is unparalleled in the world of synchronized (artistic) swimming.

Romashina, who also boasts a staggering 21 world titles, suggested after the Tokyo Games that retirement was in sight.

The star has not competed in the recent ‘Friendship Games’ organized by Russian sports officials in Kazan, and said the issue of future participation was more crucial for younger talents.

“I don’t get out of shape, I try to maintain it myself, I swim. At the same time, these are difficult times for Russian sports,” said Romashina.

“Now the issue of returning is not even about me, but about young people. I want to wish them patience and the strength to wait it out this moment and continue to work.”

Elsewhere, Russian sporting figures have suggested it is far too premature to discuss a potential ban on the nation’s athletes in Paris in two years’ time.

Russian Tennis Federation boss Shamil Tarpischev – himself an IOC member – said that qualification for tennis players, for example, would probably not be determined until after the French Open in May-June of 2024. 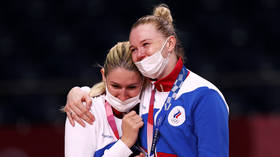 “For now we are suspended, and it is premature to discuss [Russian players missing the Olympics],” said Tarpischev.

“We have to wait and see how the situation in the world develops. In any case, it will be the decision of the International Olympic Committee.”

The IOC recommended a ban on Russian and Belarusian athletes on February 28 after the onset of Moscow’s military campaign in Ukraine.

IOC president Thomas Bach has since attempted to defend the organization’s stance by claiming it partly defends Russian and Belarusian athletes from aggression they would face at international competitions.

Numerous Russian officials and athletes have described the subsequent bans as discriminatory and contrary to the principle of sport remaining free from political interference.