Sweden to decide on constitutional changes to appease Türkiye 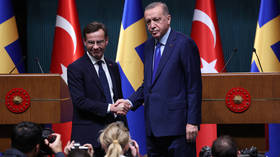 Swedish MPs will vote next week on changes to the constitution that were put forward by the government to alleviate Türkiye’s objections to Stockholm’s bid to join NATO, the country’s parliament, the Riksdag, has said.

The proposed changes would make it possible to strengthen the counter-terrorism laws, including limiting the “freedom of association of groups involved in terrorism,” the parliament said in a statement on Tuesday.
The vote is scheduled to take place on November 16. The changes, if approved, will enter into force on January 1, 2023.

The amendments were proposed under the previous left-wing government, and the Riksdag has already voted in favor of them. But in order to be implemented, they also need the approval of the new parliament, which was formed after the general election in September. The vote propelled the conservatives to power, with Ulf Kristersson becoming prime minister, but the amendments are still expected to be passed. So far, only the Left Party, which has 24 seats out of 349 in parliament, has objected to the proposed changes. 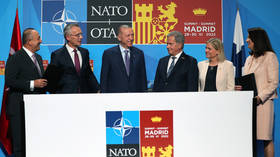 The announcement by the parliament followed Kristersson’s trip to Ankara on Tuesday, where he stated that “Sweden will live up to all the obligations made to Türkiye in countering the terrorist threat before becoming a member of NATO and as a future ally.”

The Swedish PM described the amendments to the constitution as “big steps… that will give Swedish legal authorities more muscle to fight terrorism.”

The sides agreed to hold another meeting in late October, which Kristersson said he hopes will bring “a more positive conclusion.”

Sweden and Finland applied to join NATO in May in response to Russia’s military operation in Ukraine. Türkiye, which has been a member of the US-led military bloc since 1952, accused the two countries of harboring members of the Kurdistan Workers’ Party (PKK) and other groups it considers to be terrorist organizations, and threatened to block their bids.

The sides signed a memorandum at a NATO summit in June which appeared to have broken the deadlock. However, Ankara later said it was unhappy about how the terms of the deal were being implemented by Sweden, particularly regarding clamping down on terrorist groups and extraditing suspects to Türkiye.