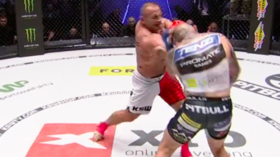 Poland's Mariusz Pudzianowski, considered by many to be among the finest strongmen competitors in history, stunned his former world champion opponent Michal Materla with a crushing first-round knockout at KSW 70 in Lodz, Poland on Saturday night.

Pudzianowski, the 45-year-old multiple time winner of the title of the World's Strongest Man, transitioned to mixed martial arts in 2009 after one of the most successful professional strongman careers the sport has ever seen – and scored arguably the biggest win of his combat career when he landed a stunning uppercut on Materla early in the first-round of their main event fight.

The man known as 'Pudz' first connected with a strong overhand right which put Materla into retreat mode, before throwing a picture-perfect uppercut which penetrated the former KSW middleweight champion's guard and connected flush with his chin, sending him cascading to the canvas.

Pudzianowski subsequently landed a follow-up shot on the ground to the already unconsious Materla, who remained unconscious on the mat for a prolonged spell before rising to his feet and embracing Pudzianowski.

Materla had moved up in weight ahead of the fight but registered just 222lbs on the scales compared to Pudzianowski's gargantuan 256lbs frame.

It was the fifth straight knockout win for Pudzianowski, and the first time in his 25-fight career in which he has won five straight fights.

“This makes him the greatest strongman ever no matter how many titles he won! So impressive,” wrote one fan in response to the shocking footage.

“Some real polish power with that devastating uppercut!” added another.

“Good. Night. Materla. This was telegraphed but scary,” said a third.

Pudzianowski, who only fought his first MMA fight at the age of 32, has now beaten a host of recnognizable names in the sport such as Sean McCorkle, Bob Sapp, Butterbean and Jay Silva – but Materla likely represents the most skilled fighter that he has defeated to date.

The fighter, who turned 45 in February, hasn't stated how long he plans on remaining in mixed martial arts – but his recent results have showed that the almost supernaturally strong Pole isn't thinking about hanging up his gloves just yet.