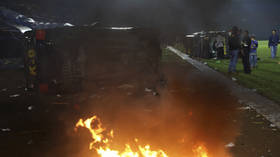 At least 125 fans and two officers have reportedly been killed amid chaos at a football game in East Java, Indonesia, after police attempted to stop a mass brawl between supporters of the two rival teams with tear gas.

Hundreds of fans rushed into the field clashing with rivals and attacking several players, after an Indonesian league football match on Saturday night ended with Persebaya Surabaya beating Arema Malang 3-2.

As huge crowds of people tried to flee for the exit simultaneously, dozens were trampled and died instantly, while many others succumbed to their injuries on the way to hospitals. Some of the victims reportedly suffocated.

“More than 120 people died, they died of chaos, overcrowding, trampling and suffocation,” said the head of the Malang Regency health office, Wiyanto Wijoyo.

The Associated Press reported at least 127 casualties, including two police officers, adding that the death toll is likely to rise, since many injured victims were in critical condition.

In the wake of the deadly incident, the Indonesian league offered deep condolences and suspended all games for at least a week, while the Indonesian football association (PSSI) promised to launch an investigation into what happened.