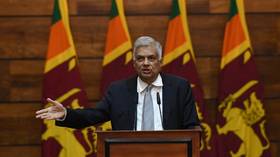 The Sri Lankan parliament has chosen six-time prime minister Ranil Wickremesinghe as the island nation’s new president. His predecessor Gotabaya Rajapaksa fled the country last week and resigned after heated protests over the state of the economy.

Wickremesinghe’s candidacy was backed by 134 out of 223 MPs during a vote on Wednesday.

The 76-year-old political veteran has been acting president since Rajapaksa’s departure.

There are concerns that Wickremesinghe’s victory could lead to even more unrest as he’s a known ally of the Rajapaksa clan, which most Sri Lankans now blame for their economic woes.

The acting president imposed a state of emergency on Monday, giving himself more powers to crack down on dissent. 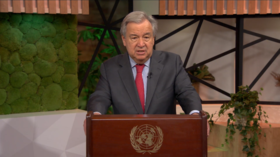 Sri Lanka had been “divided on party lines,” but now the “time has now come to work together,” Wickremesinghe told parliament following the vote.

“It is not necessarily to say how hard the condition of the country is economically, we have to embark on a new program to go forward,” he insisted.

After the withdrawal of opposition leader Sajith Premadasa, three candidates were left to battle for the top job in the South Asian country of 22 million, which is now going through its worst political and economic crisis since becoming independent in 1948.

But only former Education Minister Alahapperuma, who was supported by both the opposition and some members of the ruling Sri Lanka Podujana Peramuna (SLPP) party, was seen as a real challenger. He ended up securing 82 votes.

Wickremesinghe will be faced with a tough task as president. The country’s economy collapsed in recent months, leading to shortages of fuel, food, and other essentials. The depletion of foreign reserves forced the authorities in Colombo to engage in bailout talks with the IMF.

The crisis is being blamed on the Covid-19 pandemic, which cut tourist revenue for the island, and Rajapaksa’s ban on chemical fertilizers, which was a major blow to agriculture.