Home Iz minuta u minut South Korea hits back at DPRK missile launch with display of its... 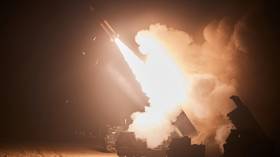 South Korea and the US launched eight ballistic missiles into the sea on Monday, as a response to Sunday’s massive launch by North Korea over the country’s eastern and western coasts.

The countries launched eight Army Tactical Missile System projectiles, one American and seven Korean, into the eastern waters of South Korea, according to Seoul’s Joint Chiefs of Staff and US Forces Korea.

The Korean military said the display – which lasted 10 minutes – was meant to showcase its ability to respond “swiftly and accurately” to North Korean attacks. 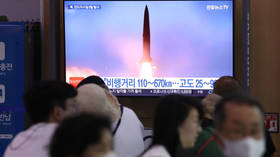 Japan and the US conducted their own joint missile exercise hours after the DPRK’s move to show off their “rapid response capability,” according to the Japanese Defense Ministry. Defense Minister Nobuo Kishi told reporters that the provocative display from the North “could not be tolerated” even though none of the projectiles landed in Japanese waters.

The North Korean projectiles were fired over 35 minutes from at least four different locations, according to South Korea, coming from western and eastern coastal areas and two inland locations. It appeared to be a single-day record for ballistic launches for the DPRK, they said.

The launch was Pyongyang’s 18th missile test of the year and followed on the heels of a US and South Korean joint drill involving the USS Ronald Reagan off the Okinawan coast, the South’s first drill involving an American aircraft carrier since 2017.

Newly-elected South Korean President Yoon Suk-yeol and US President Joe Biden have agreed to increase joint military exercises in a message of deterrence to the North, though China and Russia vetoed an effort by the UN Security Council to punish the country over an alleged ICBM launch on May 25. Another American aircraft carrier conducted exercises in the Yellow Sea following that launch, and Biden has vowed to send further “strategic assets” to the Korean Peninsula if requested by Seoul.

While Yoon’s predecessor, Moon Jae-in, sought peace with his northern counterpart and Biden’s forerunner Donald Trump strived to finally make a deal with Washington’s nemesis in Pyongyang, neither leader managed to quench the long-smoldering hostilities. Now that tensions have ramped up again and the DPRK is firing off dozens of missiles a month, South Korea and the US have both raised concerns that their shared enemy may be plotting its first nuclear test since September 2017.

The Korean War ended in 1953, but no official peace treaty was ever signed between North and South, meaning they are technically still at war.