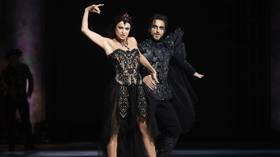 Lithuanian President Gitanas Nauseda has stripped former Olympic ice dancers Margarita Drobiazko and Povilas Vanagas of a state award after they performed at an exhibition show in the Russian city of Sochi.

Drobiazko and Vanagas are appearing in the ‘Swan Lake’ spectacle organized by Russian former Olympic ice dance champion Tatiana Navka at the resort on the Black Sea coast.

Nauseda announced on his Facebook account on Wednesday that in response, he had signed a decree depriving the pair of the ‘Order of Gediminas’ bestowed on them back in 2000.

“Enough is enough! I signed a decree removing Margarita Drobiazko and Povilas Vanagas from the list of those awarded with the 5th degree of the Order of the Grand Duke of Lithuania Gediminas,” wrote the Lithuanian leader. 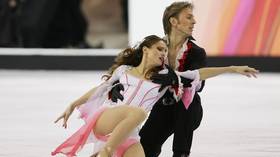 Nauseda added that he had “no doubt” that Drobiazko and Vanagas – who appeared at five editions of the Winter Olympics and won World Championship bronze for Lithuania – were “great athletes,” but accused them of a “cynical act” by appearing in the show while the conflict in Ukraine continues.

The Lithuanian president accused Drobiazko, 50, and her partner Vanagas, 52, of “spitting on” the memory of those killed in the Ukraine fighting.

Vanagas was born in Lithuania although the Moscow-born Drobiazko received citizenship in 1993.

There have been calls for Drobiazko to be stripped of her Lithuanian rights amid the row – and Nauseda suggested that discussions would continue on the matter.

“I remind you that Margarita Drobiazko obtained Lithuanian citizenship in 1993 by exception,” he wrote.

“This seems a pathetic farce given the current context. The law does not provide for a reverse… which means we have to initiate changes to the law. Democracy must know how to defend itself, otherwise it is not a democracy.” 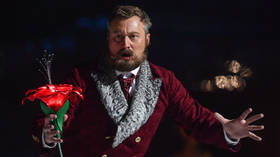 The decision to punish the ice dance duo has been condemned in Russia, with iconic figure skating coach Tatiana Tarasova – who has trained both stars – this week calling it “a real genocide.”

Show organizer Navka, who is married to Kremlin spokesman Dmitry Peskov, branded it an example of “blind hatred” towards Russia.

According to a spokesperson for the ‘Swan Lake’ spectacle, Drobiazko and Vanagas will continue to perform as planned, with the show premiering on August 9 and set to run until September 18 at Sochi’s Iceberg Skating Palace.

The pair are not the only skaters to face threats for starring in shows in Russia.

In Ukraine, President Vladimir Zelensky stripped former Olympic champion Viktor Petrenko of a state grant after he performed in another of Navka’s shows in Sochi.