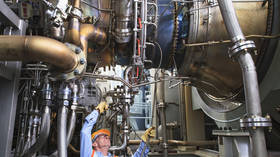 “We can continue some existing operations in Russia, such as servicing equipment for Nord Stream 1 to ensure stable gas supplies to Europe,” he was cited as saying by the news agency TASS.

Siemens is responsible for maintaining the turbines of the Portovaya compressor station for Nord Stream 1 and is currently in the process of returning one of the parts to Russia following repairs. However, delivery of the equipment has been delayed for several weeks now due to sanctions. The turbine was first held up in Canada, where it underwent repairs, and then in Germany, where it is currently stuck in transit.

Bruch also warned on Monday that his company is expected to suffer a deeper than previously expected net loss due to its planned withdrawal from Russia.