Shipping giant warns of ‘dark clouds on the horizon’ 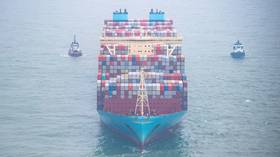 Danish shipping group Maersk warned this week of slowing demand for transport and logistics and said it had slashed its forecast for container demand for this year.

“It is clear that freight rates have peaked and started to normalize during the quarter, driven by both decreasing demand and easing of supply chain congestion,” Maersk CEO Soeren Skou said in a statement.

The world’s biggest shipping company, which is often seen as a barometer of global trade, now expects container demand to contract between 2% and 4% in 2022, down from its previous projection of +1% to -1%.

“With the war in Ukraine, an energy crisis in Europe, high inflation, and a looming global recession there are plenty of dark clouds on the horizon,” Skou warned. “This weighs on consumer purchasing power which in turn impacts global transportation and logistics demand. While we expect a slow-down of the global economy to lead to a softer market in Ocean, we will continue to pursue the growth opportunities within our Logistics business,” he added.

Freight rates soared in line with higher consumer demand during the pandemic, resulting in congested ports and delays. Although rates have since come down, it still costs more to ship a container than before the pandemic.

Maersk anticipates its average contract rate still coming in higher this year than in 2021, although it now expects the figure to be $200 lower per container than its August forecast.

On Wednesday, the company reported earnings before interest, taxes, depreciation and amortization (EBITDA) of $10.9 billion for the quarter, above the analyst consensus projection of $9.8 billion and up by around 60% from the same period a year ago.