Belgrade will stick to its policy of not imposing restrictions on Moscow, Aleksandar Vucic vows 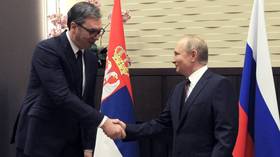 Despite suffering “enormous damage,” Belgrade will fight to maintain its policy of not joining the drastic international sanctions introduced against Moscow over the conflict in Ukraine, Serbian President Aleksandar Vucic has said.

“We've lasted eighty days” without restricting Russia and "the price we pay is huge," Vucic told local broadcaster Prva on Sunday. Serbia lacks access to the capital market and can't service its foreign loans, which affects the well-being of the population, he complained.

"They say: 'Vucic is announcing the introduction of Russian sanctions.' No, we will fight as long as we can. We suffered enormous damage, but we aren't looking for 'a thank you'," the president insisted. 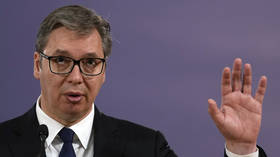 Serbia is acting this way because it is "a sovereign and independent country" that is well aware of "how unfair and unnecessary" the sanctions are, he said.

The issue of restrictions against Moscow is also closely linked to the supply of Russian gas and oil, on which Serbia is entirely dependent, Vucic said, expressing hope that Belgrade will be able to agree a "good price" on energy at the upcoming talks between the sides.

Last month, the Serbian president claimed that he was blackmailed into placing restrictions on his country's ally Russia, with Belgrade being threatened with energy sanctions of its own if it refused.

The US, the EU and some other countries have slapped numerous sanctions on Moscow after it launched its military operation in Ukraine in late February. The restrictions saw the foreign assets of the Russian Central Bank and various other entities and individuals being frozen, effectively cutting Russia off from the dollar- and euro-dominated money markets, and also saw a wide array of major international firms stopping doing business with the country. These and other moves have made Russia the most sanctioned country in the world.