Belgrade is seeking assistance to cope with the energy crisis 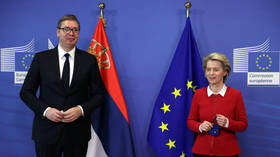 Serbian President Aleksandar Vucic on Saturday asked the EU to provide financial support to the Balkan nations amid the ongoing energy crisis, which has been exacerbated by the bloc’s sanctions on Moscow and a sharp decrease in Russia’s gas supplies.

Speaking in Sofia at the opening ceremony of the Greece-Bulgaria gas pipeline, Vucic addressed European Commission President Ursula von der Leyen directly, since she was in the audience.

“We are grateful for your support during the [Covid-19] crisis, but as far as money is concerned, we cannot cover the gas costs now. Please put our Balkan countries on the list with EU countries,” said the Serbian president.

Speaking about the need for speedy diversification of energy sources, Vucic emphasized the importance of the new pipeline, which will give his country, along with Bulgaria and Romania, access to gas supplies from Azerbaijan.

He stressed that when the project was launched nobody knew “how important it would turn out to be.” The president also expressed hope that next year his country would be able to launch a Bulgaria-Serbia interconnector. 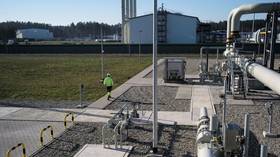 Vucic is known for his gloomy forecasts about the energy crisis. Although Serbia is not an EU member state, the country’s energy supplies transit through countries that are, meaning that sanctions imposed by the bloc on Russia directly affect it. Despite Serbia’s EU ambitions, Vucic has been opposing sanctions on Moscow, and has made it clear that his country would continue to rely on energy from Russia. In September, however, the Serbian president warned of a “very cold” winter this year and said that the next one “will be polar for all of Europe.”

Von der Leyen, who also spoke at Saturday’s ceremony, sounded more optimistic. She called the Greece-Bulgaria pipeline “a game changer” for Europe’s energy security, and said that “it means freedom from dependency on Russian gas.”

The head of the European Commission also offered reassurances that “Europe will have enough gas for winter.” This became possible, she said, owing to projects such as the new Greece-Bulgaria pipeline, and also thanks to help from Norway, the US, Algeria, and other countries.

However, the EU’s energy officials seem to hold a view closer to Vucic’s. On Friday, EU Commissioner for Energy Kadri Simson warned that “this will not be an easy winter for us, and the next winter will be even more difficult.”