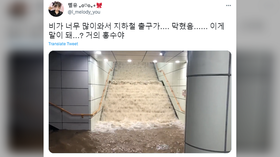 South Korean authorities have put emergency services on alert as record-setting rainfall triggered flooding in Seoul on Monday, including the capital’s famous Gangnam district. Koreans have shared photos and videos of flooded roads, homes, and subway stations on social media.

Heavy rain has caused blackouts in some parts of Seoul and forced residents of low-elevation areas to evacuate, according to local media. Multiple underground rail stations also shut down.

As of Monday evening, Seoul had received 90.5 mm of rain per hour. The Dongjak district in the south of the capital recorded 137 mm, the “worst rainfall in decades,” according to the Korea Herald.

Southern parts of the capital were the most affected, in particular the districts of Gangnam and Gwanak, where the Dorimcheon stream rose above its banks.

Residents of the capital shared photos and videos of the flooding with the local media.

There were also many reports of submerged cars, road damage, and fallen trees, but as of midnight local time – no casualties.