The incident occurred during the men's 15km scratch race 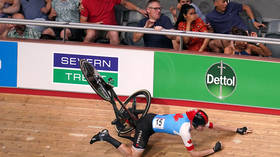 Cycling at the Commonwealth Games has been left to lament another horrific crash after a rider went over the barrier and another flew into the crowd leaving both athletes and paying spectators needing urgent medical attention.

The incident occurred during the final lap of qualifying for the men's 15km scratch race and prompted medical teams to immediately rush onto the track.

As Matt Bostock was taken away on a stretcher, Matt Walls received treatment behind a set of screens in the stands where a wheelchair user had to be removed while covered in blood and a young girl needed assessing due to a cut on her arm.

Along with Canada's Derek Gee, the duo of cyclists were taken to hospital and the remainder of the session had to be abandoned.

Reacting to the developments, Team England tweeted that its thoughts were with "the riders and spectators involved in the incident".

Scottish Cycling spoke of "another big crash at the velodrome" and noted that its rider Kyle Gordon was "taken down but thankfully got up and got back on this bike" before offering its thoughts to Bostock and Walls.

The crash comes after Joe Truman was knocked unconscious in a separate collision on Saturday when riding at 45mph for England in the keirin semi-final.

Truman suffered a broken collarbone too, and was sent flying when riding into Australia's Matthew Glaetzer on the final lap.

Initially laying motionless on the velodrome floor, Truman regained consciousness when medical staff attended him but then had to be taken away to hospital in a wheelchair while receiving oxygen.

Truman underwent treatment for his collarbone there plus head scans, with Olympic cycling legend Sir Chris Hoy describing the fall as "about as big as you can get in cycling".

"It reminds us how tough these guys are and how brave you have to be," Hoy added.

The Commonwealth Games began in Birmingham on Thursday and are set to conclude on August 8.