Arnie has finally confirmed long-time Hollywood rumors about ‘Stop! Or My Mom Will Shoot’ flick 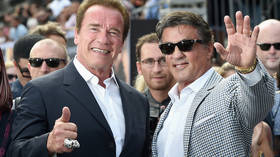 Action star Arnold Schwarzenegger has admitted to the Hollywood Reporter that he tricked his then-rival Sylvester Stallone into starring in one of his worst movies, ‘Stop! Or My Mom Will Shoot.’

The magazine, which published a major interview with Stallone on Monday, reached out to Schwarzenegger, asking him to comment on long-circulating rumors about the 1992 buddy cop comedy.

It was claimed that Arnie hated the script, but deliberately leaked that he was very interested in the role in hopes that Sly would pick it up and end up starring in a bad movie, which would damage his career. And his plan worked.

“It’s 100% percent true. In those days we did all kinds of crazy things to get ahead in our rivalry,” Schwarzenegger, 75, told journalists.

But the former governor of California pointed out any strife between him and Stallone is history now. “Luckily for us and everyone else, today, we root for each other. Thank God, because we sure don’t ever need another ‘Stop! Or My Mom Will Shoot.’” 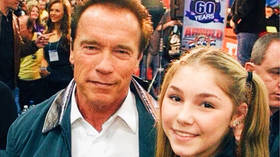 When it came out, the movie was destroyed by the critics and is still believed to be one of the worst in Sly’s five-decade-long movie career. However, it did relatively well at the box office, grossing more than $70 million.

Stallone, 76, told the Hollywood Reporter about how he got himself into ‘Stop! Or My Mom Will Shoot.’ The actor recalled that he “had heard Schwarzenegger was going to do that movie and I said, ‘I’m going to beat him to it.’ I think he set me up.”

The film “was supposed to be like ‘Throw Momma From the Train’ with the mom as this really nasty piece of work. Instead, you hire the nicest woman in Hollywood, Estelle Getty, who you wish was your mother. That’s the end of that!” he said.

Sly also insisted that when Arnie and him meet these days they find themselves “just laughing at the old times.”

According to Stallone, he told his former rival that “‘We are the last two tyrannosaurus.’ We’re the last two meat eaters, and there’s not much beef left out there. So we better enjoy each other.”