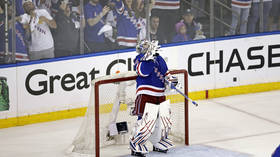 Russian goalie Igor Shesterkin was hailed as “outstanding” as his resolute performance helped the New York Rangers gain a valuable foothold in their Stanley Cup playoff series against the Carolina Hurricanes.

Shesterkin made a remarkable 43 saves as the Rangers ran out 3-1 winners at a raucous Madison Square Garden on Sunday night.

The result halves the deficit to 2-1 in the Eastern Conference second-round series with the Hurricanes, with the pair next meeting for Game 4 in New York on Tuesday.

“Igor was outstanding for us and that was the key,” said Rangers coach Gerard Gallant as he paid tribute to the Russian stopper. “He’s the key for our group.”

Shesterkin, 26, has enjoyed a stellar season for New York and is a finalist for the Hart Trophy – awarded to the NHL’s most valuable player in the regular season – as well as the Vezina Trophy for the league’s best goalie.

Performances like Sunday show why the Moscow-born star is a nailed on winner of the latter accolade – even if he was disappointed with the one goal he did concede from a stoppable shot from Nino Niederreiter.

“I gave up a goal and let down the team,” Shesterkin said. “I had to fix the mistake that I made.” 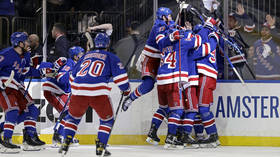 Teammate Filip Chytil paid tribute to the Russian and his superb campaign.

“He’s been doing it all season,” said the Czech forward. “We know what he’s capable of. He’s one of the best goalies in the game and we just trust every second he’s in the net. We just trust him and he’s doing what he can do. He’s unbelievable.”

The Rangers were grateful to Shesterkin in their dramatic first-round playoff win against the Pittsburgh Penguins in a Game 7 decider, when he made 42 saves.

The Rangers edged themselves back into contention against Carolina with goals from Mika Zibanejad, Chris Kreider and Tyler Motte in front of more than 18,000 fans at the Garden.

Russian winger Artemi Panarin registered an assist for Zibanejad’s goal to get the Rangers underway in the first period. 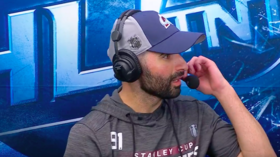 Elsewhere in the playoffs, Nikita Kucherov starred as the Tampa Bay Lightning forward scored and produced three assists in his team’s 5-1 rout of the Florida Panthers.

The tally moved Kucherov to 142 (48 goals, 94 assists) points in NHL playoff history – putting him one ahead of countryman and Washington Capitals star Alexander Ovechkin, although still behind Evgeni Malkin of the Pittsburgh Penguins in overall terms among Russians in the all-time charts.

Kucherov and two-time defending Stanley Cup champions Tampa Bay will look to seal their second-round series against the Panthers when they meet in Game 4 at Amalie Arena on Monday night.

Among the outright favorites for the Stanley Cup, Florida saw off Ovechkin and the Capitals in the first-round of the playoffs, but the Presidents’ Trophy winners will face an almighty effort to drag themselves back into contention against the Lightning.