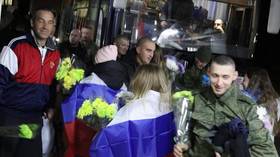 A total of 35 Russian soldiers have returned home from Ukrainian captivity to the Lugansk People’s Republic, the LPR’s leader, Leonid Pasechnik, said on Thursday. According to local officials, the group arrived at their destination after being released by Ukraine as part of a major prisoner swap with Russia last week.

Pasechnik wrote on Telegram that the returned personnel are members of the LPR’s People’s Militia, the republic’s armed forces. He also claimed that they were subjected to inhumane treatment while in captivity.

“Needless to say, regarding the conditions … in Ukrainian captivity, [there were] beatings [and] abuse,” and the soldiers “are exhausted, but not broken,” he said.

The LPR’s People’s Militia confirmed the release, adding that 33 soldiers were serving with the military, and another two are “residents of the republic who protected” the neighboring Donetsk People’s Republic.

“Now they are about to undergo a serious [medical] examination and probably a long rehabilitation after being tortured in Ukrainian captivity,” the statement read.

According to Viktoria Serdyukova, the LPR’s commissioner for human rights, 33 of the soldiers were released by Ukraine as part of a previous exchange with Moscow, adding that “today they have been brought back from one of Russia’s regions” where they were taken care of by medical professionals.

“Unfortunately, as usually happens, the condition of our service members is unsatisfactory, to put it mildly,” she said, adding that one person is in “extremely serious” condition.

Footage published by the LPR’s People’s Militia shows the emotional moment the ex-prisoners were reunited with their loved ones.

In recent months, Russia has conducted a number of major prisoner exchanges with Ukraine. The most recent took place on November 3, when Russia and Ukraine each released 107 captured personnel.