Russian rescuers racing to save rare whale tangled in net 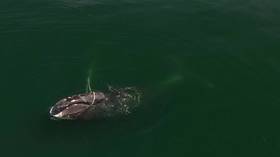 A rescue team has been trying to save a rare bowhead whale that became entangled in a fishing net off the Russian coast of the Sea of Okhotsk, the World Wildlife Fund (WWF) Russia said on Friday.

According to the statement, the whale, which belongs to a species included in the Russian Red Data Book of rare and endangered animals, fell into a net set up by local fishermen near the coast and then swam away, thus becoming entangled.

The stricken bowhead was first spotted by local guides during a sea outing with tourists. WWF specialists, biologists and professional animal rescuers quickly formed a rescue team, which was also supported by guides and local fishermen. The whale was soon located, but, according to the fund, did not let the rescuers approach it. 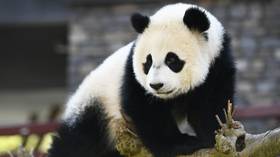 “Now it is clear that the whale still managed to throw off most of the ‘plume’ from the seine, but thick ropes remain on it,” the WWF said.

One of the ropes wrapped around the whale’s upper jaw has become entangled in its whiskers. This is a potentially life-threatening impediment, because it means the animal may not be able to properly feed.

If the rescuers don’t manage to free the whale of the nets, the ropes might tighten on its body, resulting in injuries that could eventually weaken it and make it more prone to illnesses and parasites.

“You might think: what is this news? A whale has tangled up in a net, what’s the big deal. But for the survival of a population consisting of only 300-400 animals, the death of just one whale is a tragedy,” WWF expert Boris Solovyov said.

An expedition carried out by the fund last year revealed that every third bowhead whale had scars from nets and ropes. One animal observed had lost half of its tail to tightening ropes.

The bowhead whale is one of the world’s largest mammals. Males generally reach a length of 14-17m, while females are a bit larger at 16-18m. Some bowheads have been recorded reaching 22m.

The bowheads of the Sea of Okhotsk are considered among the most vulnerable populations of whales dwelling in the polar seas. These whales inhabit the Sea of Okhotsk year round and do not leave Russian waters. WWF notes that the seas used to be populated with thousands of bowheads, but “predatory whaling” resulted in an almost complete extermination of them.