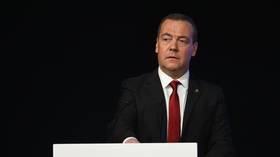 Ukraine’s threat to resume its nuclear program was one of the key reasons that forced Russia to launch its military operation in late February, former Russian president Dmitry Medvedev said on Monday.

Writing on the Russian social media network Vkontakte, he argued that the Ukrainian authorities are now “crying bitterly” over their decision to relinquish the nuclear arsenal they inherited after the collapse of the Soviet Union.

Kiev made this decision after caving in to “harsh pressure of their current masters in Washington,” Medvedev, who currently serves as deputy chairman of Russia’s Security Council, stated. He added that all Ukrainian presidents – from the late Leonid Kravchuk to the incumbent Vladimir Zelensky – described the step as a forced one.

However, according to the official, Kiev has made clear that it “would be diabolically happy” to use nukes against Russia and “their own citizens”. 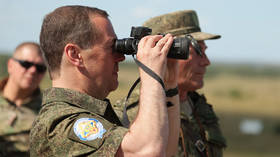 “They have been dropping explicit hints about this, threatening to resume the nuclear program. And that was one of the reasons for conducting the special military operation,” he insisted.

Medvedev also drew a sharp contract between Ukraine and South Africa, the first country with a nuclear arsenal to voluntarily give it up. He noted that after the collapse of the apartheid regime, the nation’s new democratic authorities “took a responsible and sovereign stance towards their people, neighboring countries and the entire world community”.

“And today they do not regret the choice made 30 years ago, they are proud of it and show the way for others by their example,” he added.

Under the 1994 Budapest Memorandum, Ukraine surrendered its Soviet-era nuclear arsenal in exchange for promises from the US, Britain and Russia that they would “provide assistance” to the country in case of aggression. The three states also vowed not to attack Ukraine themselves.

However, Russian officials have repeatedly stated that this document was undermined by NATO’s eastward expansion, which threatened Moscow’s vital security interests. Moreover, prior to the start of the Ukraine conflict in late February, Zelenksy signaled that Kiev could give up its decades-old pledge to be a non-nuclear nation and reverse the decision it took to give up its atomic weapons.