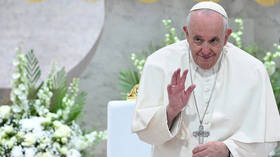 Russia takes into account lists of prisoners provided by Pope Francis during the exchange of captives with Ukraine, Russian Ambassador to the Vatican Aleksandr Avdeyev has said.

“The release of Ukrainian prisoners by the Russian side or the exchanges are also conducted with the consideration of the lists regularly provided to us by Pope Francis,” Avdeyev told Italian news website Askanews on Tuesday.

“We appreciate the personal work of the pontiff, who is carrying out an important humanitarian mission, which makes it possible to return hundreds of people to their families.”

The Pope said in September that he had contacted the Russian ambassador after receiving a list of more than 300 prisoners from “Ukrainian emissaries.” The Kremlin said last month that Moscow would welcome the Pope’s help in bringing about a peaceful resolution of the conflict.

Moscow and Kiev recently carried out two major prisoner swaps in the span of a week. According to the Russian Defense Ministry, 50 soldiers were freed on Saturday and 107 on Thursday.

On the same two days, officials in Kiev said 52 and 107 Ukrainians had been handed over by the Russian side.