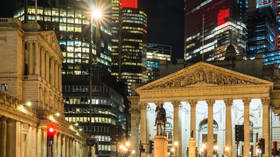 Russia’s state-owned gas company Gazprom said on Friday it was delisting its depository receipts from international stock exchanges after the Russian government refused to agree on their further circulation.

According to a statement on the company’s website, holders will have the “right to convert them into ordinary shares.”

Gazprom also said it has notified the UK’s Financial Conduct Authority of its intention to cancel standard listing on the London Stock Exchange (LSE). The company has also asked the LSE and the Singapore Exchange to delist its depositary receipts within 20 business days.

Under a new law, the securities of Russian companies can be traded on foreign trading floors only with special permission by Russian authorities.

Last month, LSE blocked trading in 27 Russian corporations, including EN+, Gazprom, Lukoil, Rosneft, and Sberbank. The blacklist was part of Western efforts to cut Russia off from the international financial markets in response to Moscow’s military operation in Ukraine.