Redeployment across the Dnieper River was completed on Friday morning, with no loss of life or equipment, it stated 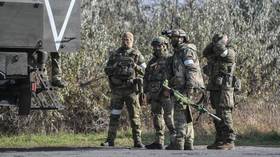 Russian forces have completed the redeployment to the left bank of the River Dnieper in Kherson Region, the Defense Ministry has said. The maneuver was completed early Friday morning, according to the statement.

The ministry denied reports that military hardware was abandoned on the other bank, or that Russian troops suffered casualties during the withdrawal.

“Russian units have taken the prepared defensive lines and positions,” the ministry said. “No loss of personnel, weapons, vehicles, or materiel of the Russian forces was allowed. All civilians who wished to leave the right bank of Kherson Region were provided with assistance.”

The statement claimed that Ukrainian troops tried to disrupt the movement of civilians across the river with artillery fire, but failed to do so. Russia intercepted 28 rockets fired by HIMARS launchers and diverted five others through electronic countermeasures, it said.

Russian artillery and aircraft deterred Ukrainian units from closing the gap with the river, the military added. They were stopped at least 30km from the river crossings, according to the statement. 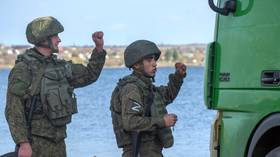 Defense Minister Sergey Shoigu ordered the troops to move across the river on Wednesday morning. He said the step was taken to avoid unnecessary deaths of the soldiers and to take up a stronger defensive position.

The decision, which was described as “difficult” by military officials, left the provincial capital, Kherson, exposed to capture by Kiev’s forces. The regional authorities have urged residents of the city for weeks to leave and go to safe places to the east.

Russia incorporated Kherson Region last month, after the people voted in a referendum to break away from Ukraine and join Russia. Kiev called the vote a “sham” and pledged to keep fighting until all land that it considers to be rightfully Ukrainian is taken.