Brittney Griner is being held in Russia on narcotics charges 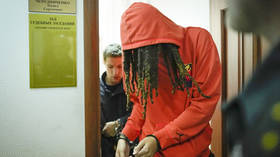 A Moscow court has extended the detention of US women’s basketball star Brittney Griner, who was initially arrested on drugs charges at an airport in the Russian capital back in February.

Griner, who is widely considered to be among women’s basketball’s greatest ever players, had arrived at Sheremetyevo Airport on a flight from New York when a sniffer dog drew the attention of officials to her luggage. A search then discovered banned cannabis oil vape cartridges.

A judge at Khimki district court just outside Moscow extended the 31-year-old’s detention on Friday as the investigation into her case continues.

“The court granted the petition of the investigation and extended Griner’s preventive measure in the form of detention until June 18,” RIA reported.

Griner appeared at the hearing wearing handcuffs and with her face obscured by a hood.

Her lawyer, Alexander Boykov, told the AP: “We did not receive any complaints about the detention conditions from our client.”

Griner could face between five and 10 years behind bars if found guilty of narcotics smuggling. 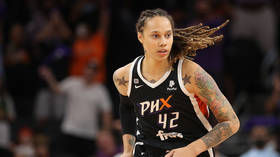 The basketball icon arrived in Russia to play for UMMC Ekaterinburg in a lucrative deal during the WNBA offseason in her homeland – something she has done for the past seven years.

A double Olympic gold medalist with the US as well as a WNBA champion with the Phoenix Mercury, Griner is revered among basketball fans and is also a seven-time WNBA All-Star.

Her case has attracted mounting attention in the US, where ‘BG42’ signs – in recognition of her number – were placed on the home courts at all 12 WNBA teams for the start of the season earlier this month.

The US State Department changed its stance on Griner’s case at the beginning of May to classify her as “wrongfully detained,” a move which means her case will be handed to the Office of the Special Presidential Envoy for Hostage Affairs.

US officials have met with Griner during her detention in Russia and said at the end of March that she was found to be in “good condition.”

Unconfirmed reports in Russia on Friday claimed that Griner could even be exchanged for Russian businessman Viktor Bout.

A high-profile case, Bout was detained in 2008 in Thailand at the request of Washington and subsequently transferred to the US, where he was sentenced to 25 years in prison in 2012 over alleged involvement in a weapons smuggling plot.

TASS cited a source in the Moscow Public Monitoring Commission as claiming that preliminary discussions are already underway about a potential swap involving Griner and Bout.

Earlier this month, Russia and the US exchanged prisoners when Russian pilot Konstantin Yaroshenko returned home after spending around a decade in a US prison over alleged involvement in a drug-smuggling scheme.

Yaroshenko was exchanged for ex-US Marine Trevor Reed, who had been in Russian custody since 2019. Reed, a student at the time, was detained in Moscow for drunk and disorderly behavior and an assault on police officers, resulting in a nine-year term.