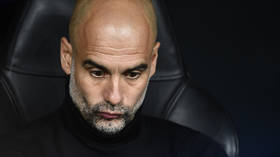 City seemed on course for a second successive appearance in the final of Europe’s showpiece club competition as they held a two-goal aggregate cushion with 90 minutes on the clock of their semifinal second leg at the Bernabeu on Wednesday night.

But the hosts had other plans as a stunning late double from Rodrygo leveled the tie before French hitman won it for Real with an extra-time penalty.

City players were crestfallen at the final whistle as their wait for European glory goes on despite the hundreds of millions of pounds plowed into the club since their wealthy Abu Dhabi benefactors took over back in 2008.

The result was also more personal pain for City manager Pep Guardiola, touted as among the finest coaches of his or any other generation but with a string of European failings spanning a decade since he lifted the second of his Champions League titles with Barcelona in 2011.

As the dust settled on another sensational Real Madrid comeback and Manchester City collapse, one viral take on the match was offered by the social media account at Spartak Moscow.

Making a tongue-in-cheek comparison with the big-spending English club, Spartak tweeted “Can confirm that we have the same amount of UCL trophies as Manchester City” in a post which has racked up more than 200,000 ‘likes’ and counting.

City had seemed destined to set up a date with Liverpool in the Champions League final in Paris on May 28 when Riyad Mahrez put them 1-0 up after 73 minutes and 5-3 ahead on aggregate against Real.

But Carlo Ancelotti’s men yet again showed their never-say-die attitude with a stirring late turnaround – mirroring performances against Paris Saint-Germain and titleholders Chelsea earlier in this season’s competition.

For the evergreen Karim Benzema, 34, his late career renaissance continued as his penalty resulted in a 10th goal in this season’s Champions League knockout stages – a joint record for a single campaign alongside former teammate Cristiano Ronaldo.

Real will now go in search of a record-extending 14th top European title by aiming to beat Liverpool – the team they defeated in their last appearance in the Champions League final in Kiev four years ago.

City meanwhile will resume their bid to retain their Premier League title, where they top the table by one point ahead of Liverpool with four games remaining. 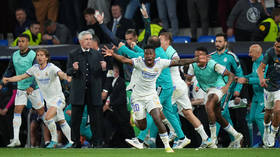 Spartak have suffered a disappointing domestic campaign by their standards and lie a lowly 10th in the Russian Premier League table with three games to play, having finished runners-up last time round.

The Moscow giants had been faring much better in Europe this season, causing a shock to top a Europa League group containing Napoli, Leicester City and Legia Warsaw.

But the Russian club was deprived of the chance to play its Last 16 match in the competition against Germans RB Leipzig when UEFA banned all Russian teams from its competitions due to the conflict in Ukraine. Russian clubs have also been barred from Europe next season.

In social media terms, Spartak’s channels have a knack of capturing the football pulse during seismic events

When Lionel Messi was approaching status as a free agent back in January 2021, Spartak went viral for a mock text message exchange with the Barcelona icon in which he rejected the club’s advances.

During the European Super League fiasco of April 2021, Spartak made a public offer for disgruntled fans of the teams involved to switch allegiances to them – racking up more than 250,000 ‘likes’ for the Twitter message.