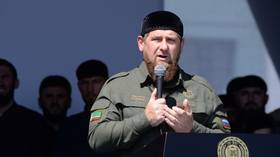 Chechen Republic chief Ramzan Kadyrov has said Russian athletes should consider themselves to be “winners” after sweeping sporting sanctions were imposed on the country following the launch of the military operation in Ukraine.

The International Olympic Committee (IOC) recommended at the end of February that federations across all sports decline to invite Russian and Belarusian athletes to events wherever possible.

That stance has since been adopted by a host of authorities, from the likes of powerful football governing bodies FIFA and UEFA to smaller organizations such as the International Canoe Federation.

But as athletes are forced to sit out global competitions, Kadyrov said the bans proved that rivals lived in fear of being beaten by Russian competitors.

“When sanctions were imposed against me, I considered myself a winner,” said Kadyrov, who has been targeted by the likes of the US in recent years.

“They [Russian athletes] are winners. I congratulate them on their victory. They are afraid [of Russian athletes], so they are not allowed in,” added Kadyrov, who was quoted by RIA while speaking at the ‘New Horizons’ forum. 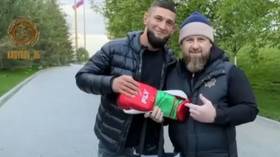 Since being isolated by a range of federations, Russia has sought new avenues for domestic and international competition.

That has been coupled with increasing talk of a pivot towards Asian sport to escape the perceived political machinations of the West.

“I think that we have regions that are friends with us,” said Kadyrov.

“We can hold competitions with them… we can continue to live until we prove to the whole world that we are right, that we cannot be broken and brought to our knees.

“This will be in the near future. They must admit, apologize [to us] and lift all sanctions against Russia and against everyone. It will definitely happen,” added Kadyrov confidently.

The Chechen leader is not the first figure from Russia to suggest that Western forces will regret allegedly allowing politics to interfere with sport.

Decrying “Russophobia,” cross-country skiing boss Elena Vyalbe said back in March that she was “sure that we will see how these people will apologize.”

“They will say: ‘Yes, guys, we didn’t know much, they didn’t tell us much, we now learned and, of course, we are ashamed of our actions,”

Russian assertions that sanctions placed on its athletes are discriminatory have been largely dismissed by the IOC, whose president Thomas Bach claimed it is a “cheap argument” to say that sport was being undermined by politics.


READ MORE:
Olympic boss explains why Russia was sanctioned but others weren’tOriginal Article