Russian ace on course for number one ranking 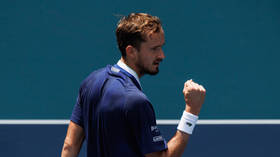 Russian star Daniil Medvedev could once again sit on the summit of the men's tennis world rankings – but only if his rivals slip up in the next couple of weeks.

Medvedev, a former world number one, is currently ranked as the second best player in the world behind Serbian star Novak Djokovic and ahead of Germany's Alexander Zverev, who is third, but could return to the pinnacle of the sport after the Italian Open, which concluded on May 15.

After some tennis aficionados crunched the numbers, it has been determined that Medvedev will return to the top of the rankings unless either of the following scenarios occurs.

Djokovic will remain top if he reaches the semi-final in Rome, but would have needed to reach the final had Zverev won the Madrid Open (he was defeated by Spain's Carlos Alcaraz Garfia in Sunday's final) AND won the Italian Open.

Zverev would have jumped into the top position had he won in both Madrid and Rome – but only if he didn't beat Djokovic in the final in Italy.

Simply put, this means that if Novak Djokovic reaches the semi-final of the Italian Open he will remain in the top position in the world rankings.

Djokovic plays his first match of the event on Tuesday when he takes on another Russian player, Aslan Karatsev, in the round of 32.

If he is eliminated in the quarter-finals or before, Danill Medvedev will once again be hailed as the top tennis player on the planet.

Medvedev, meanwhile, looks set to make his return from hernia surgery at the Geneva Open which begins on May 14 in what will be his first action on the court since losing in the quarter-final of the Miami Open in March.

It will be Medvedev's only clay court appearance in advance of the French Open. The Russian, though, is expected to miss Wimbledon this summer after the event's organizers, the All England Club, announced a ban on players from Russia and Belarus in the wake of Russia's military campaign in Ukraine.