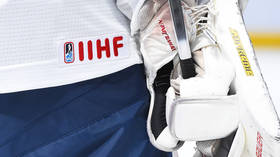 Russia will no longer host the 2023 Ice Hockey World Championship, the IIHF has announced, with the event being moved from St. Petersburg.

The IIHF confirmed the step in a statement on Tuesday after a meeting of its council in Zurich.

“Out of concern for the safety and well-being of all participating players, officials, media, and fans, the IIHF Council has decided to withdraw the hosting rights of the 2023 IIHF Ice Hockey World Championship from Russia,” a press release read.

The hockey showpiece was due to be held in the northern Russian city in May of next year.

The IIHF had already banned Russian teams from all its competitions following Moscow’s military campaign in Ukraine, and had removed the 2023 World Junior Championship from Russia which had been scheduled to take place in December and January in Novosibirsk and Omsk.

The IIHF said an alternative for the men’s senior tournament would be confirmed during its 2022 annual congress in Finland in May, where this year’s World Championship is being held in Tampere and Helsinki.

“The Council expressed significant concerns over the safe freedom of movement of players and officials to, from, and within Russia,” added the IIHF.

St. Petersburg had been gearing up to host next year’s event at the brand new, 21,000-seater SKA Arena, which was being built in time for the championship. The other venue was set to be the city’s Ice Palace.

Russia last hosted the IIHF men’s World Championship in 2016, when the tournament was split between Moscow and St. Petersburg.

The IIHF is among a host of sports federations to impose sanctions on Russia and Belarus in the wake of Moscow’s military operation in Ukraine.

Other major events to be removed from Russia include the 2022 UEFA Champions League final, which was also due to be held in St. Petersburg.