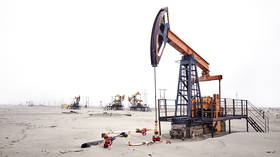 Russia will see its income from the oil sector rise sharply this year and reach more than $180 billion, despite production cuts related to international sanctions, suggests a report published by independent research house Rystad Energy on Monday.

Thanks to the rising oil prices, Russia’s tax revenues will be 45% higher than last year and a whopping 181% higher than in 2020, Rystad Energy says.

“Europe’s dependence on Russian energy has been a deliberate and decades-long and mutually beneficial relationship. In this early phase of sanctions and embargoes, Russia will benefit as higher prices mean tax revenues are significantly higher than in recent years.” says Daria Melnik, a senior analyst at Rystad Energy.

According to the firm, the initial issues Russia had with its oil exports when European customers started shunning its oil were quickly resolved and loadings began to recover in late March, supported by orders from China and India. Russian crude exports remained resilient in April.

The EU, the US and their allies imposed sanctions against Russia with the aim of starving the country of cash and forcing it to abandon its military operation in Ukraine. However, Europe’s high dependence on Russian oil and gas has meant that turning away from it has proven problematic. The EU has pledged to phase out Russian gas by 2030.

If the EU decides to further restrict energy imports from Russia and impose an oil embargo, something that’s reportedly being considered by the bloc, Russia will be forced to cut oil production further as it lacks storage capacity for extra crude volumes and may not be able to quickly redirect the unwanted cargoes, Rystad Energy explains. In the long-term, Russia’s crude output will continue to decline more steeply than was estimated before the Ukraine crisis.