The undersea cruiser Generalissimo Suvorov will soon be ready for service, the manufacturer says 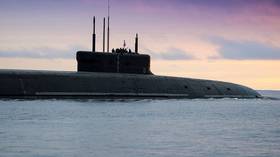 Russia’s new strategic nuclear submarine, Generalissimo Suvorov, is almost ready for the country’s navy, the manufacturers of the vessel at Sevmash shipbuilding enterprise in Severodvinsk said on Monday.

Before the Russian navy gets the new submarine, a series of activities need to be carried out aboard the vessel, including the revision of mechanisms, interior finishing, and equipment loading, he said.

Last week, Generalissimo Suvorov successfully test-fired a Bulava-class submarine-launched ballistic missile, hitting a target at a training range in the far-eastern Kamchatka Peninsula from the White Sea. The launch was carried out underwater. 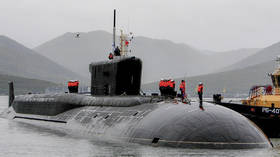 K-553 Generalissimo Suvorov is the sixth vessel of Russia’s 4th generation ballistic missile submarines and the second mass-produced ship in the upgraded Borei-A class. The subs of this class can carry up to 16 nuclear-capable Bulava missiles.

The vessel was named after Alexander Suvorov, an 18th-century general who is considered to be one of the most outstanding military commanders in the country’s history.

The Russian navy is getting a new submarine amid heightened tensions with the US and its allies over the conflict in Ukraine. Late last month, both Russia and NATO staged nuclear strike drills, with both claiming that the exercises were routine and had nothing to do with current events.