Earnings are expected to reach $337.5 billion this year, Reuters reports 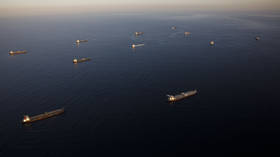 Russia will see a 38% year-on-year increase in energy earnings due to higher oil export volumes, coupled with rising natural gas prices, Reuters reported on Wednesday, citing a document from the German Economy Ministry.

According to the report, the country’s revenues are expected to jump to $337.5 billion this year, which will help shore up the Russian economy in the face of Western sanctions.

The document predicted that energy export earnings will ease to $255.8 billion next year, but will still be higher than the 2021 figure of $244.2 billion.

According to the forecast, the average gas export price will more than double this year to $730 per thousand cubic meters, before gradually falling until the end of 2025.

The document pointed out that Moscow has started to gradually boost its oil production following the sanctions-related curbs and as a result of increased purchases by Asian buyers.

Moscow has also improved its forecasts for output and exports until the end of 2025.

Overall, the German Economy Ministry forecast cited by Reuters suggested that the Russian economy is coping well with the sanctions regime and will contract by less than expected.