Soldiers will observe a ceasefire to let civilians exit in all directions, the Ministry of Defense has announced 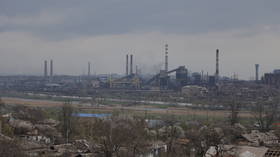 Russian and Donbass forces will observe a ceasefire around the besieged Azovstal steel mill in Mariupol starting from 2pm Moscow time on Monday, allowing civilians to evacuate to safety, the Russian Defense Ministry has said.

Colonel General Mikhail Mizintsev, the head of Russia’s National Defense Management Center, said that armed units will “withdraw to a safe distance and maintain the exit of civilians from the said area in any direction they choose.”

Russian and Donbass troops mainly control the city, but a number of Ukrainian soldiers have been holed up in Azovstal. Ukrainian President Volodymyr Zelensky, however, claimed last week that roughly 1,000 civilians remained in the mill as well.

Mizintsev said there were “no obstacles” for civilians to leave the Azovstal plant, other than “the decision of Kiev and the commanders of nationalist units to use civilians as a human shield.”

Russia previously offered the Ukrainian fighters the opportunity to lay down their arms and surrender, but they refused.