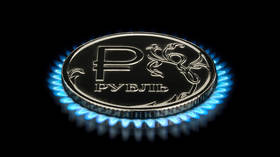 Russian tax law has been amended to make it easier for foreign companies to open accounts in Russian banks and register with the country’s tax authority.

President Vladimir Putin signed a bill into law amending Russia’s tax code on Sunday, and it was published on the official portal for legal information.

The law aims to help foreign firms pay for Russian gas in rubles, in line with the new mechanism adopted last month. Foreign entities will be able to register with Russia’s tax authority after the bank that opens an account for them submits an application.

“This makes it really easy to register and open an account,” business daily Vedomosti quoted lawmaker and tax committee member Olga Anufrieva as saying. She added that the measure is temporary.

In March, Moscow demanded that “unfriendly states” which have imposed economic sanctions on Russia pay for gas in rubles. Brussels refused, saying that doing so would breach the Ukraine-related sanctions and the terms of current contracts. However, according to media reports, 10 member states, including Germany, Austria, and Slovakia, have agreed to use the new payment mechanism, and four have already made their first payments in the Russian currency. The Hungarian government confirmed on Sunday that it had opened a euro account with Russia’s Gazprombank.