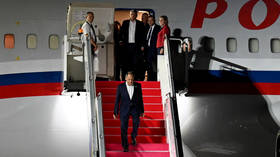 Reports that Russian Foreign Minister Sergey Lavrov had been hospitalized after his arrival at the G20 summit on the Indonesia island of Bali are “top-level fake news,” Foreign Ministry Spokeswoman Maria Zakharova said.

Zakharova, who is also in Bali, said that she was reading the news with the foreign minister and we “just couldn’t believe our eyes.”

The FM isn’t in hospital, she insisted, and that the reports were “of course, top-level fake news.”

AP and some other Western outlets reported on Monday that Lavrov was taken to hospital with heart problems shortly after arriving in Bali.

Zakharova later posted a short clip on Telegram, which showed Lavrov sitting on the terrace of his hotel room in shorts and a t-shirt, working on documents.

When asked to comment on the reports, the minister said that “this is a kind of game that isn’t new in politics.”

The 72-year-old diplomat advised Western journalists “to be more honest, report the truth more often” and be less one-sided when covering events related to Russia.

The G20 summit will take place in Bali on Tuesday and Wednesday. The Russian delegation is headed by Lavrov after President Vladimir Putin decided to skip the trip because of the “need to stay” in Russia. According to the Kremlin, there are also no plans for Putin to address the gathering via video link.