Valeri Karpin has vowed to remain within Russian football 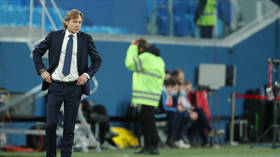 Valeri Karpin, the head coach of both the Russian national team and FC Rostov in the Russian Premier League, has confirmed that he turned down an approach from the Football Federation of Armenia to take over the top job in Yerevan.

Russia would earn passage to the second round of World Cup qualification playoffs but were banished from the competition by FIFA soon after the onset of Russia’s military operation in Ukraine; a situation which seemed to leave Russian football – and Karpin himself – in limbo.

In March, though, Karpin would agree a deal to stay on as Russian head coach until the end of 2022, while also returning to FC Rostov whom he’d left by mutual consent soon after taking the Russia job.

Karpin last week put an end to speculation about his future when he agreed a deal to stay on as Russia head coach until August 2024 – but not before he turned down overtures from Armenian football.

Speaking to Sport Express, Karpin revealed that he was made an attractive offer by the football authorities in Armenia before he signed his extension with the RFU

“There was a call, yes. Listened to the offer. It is good,” Karpin said via translation.

And asked why he didn’t sign the contract, Karpin offered a simple explanation.

“Because I am the coach of the Russian national team and Rostov,” he said.

Karpin’s links to Armenia come just weeks after one of his players at Rostov, Armenia international Khoren Bayramyan, publicly called for the Russian to move to Armenian football.

“I want Karpin to head the national team of Armenia,” he said in October, as noted by Show Sport.

Armenian football veteran Roman Berezovsky is currently in charge of his country on a caretaker basis after Spanish manager Joaquin Caparros was relieved of his duties following his side’s 3-2 defeat to the Republic of Ireland in Dublin in September.