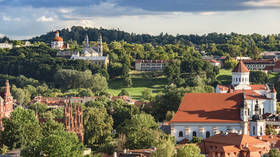 Earlier this week, the Baltic country’s lawmakers unanimously passed a resolution stating that “the Russian Federation, whose military forces deliberately and systematically bomb civilian targets, is a state that supports and practices terrorism.”

Since the beginning of the conflict in late February, Ukraine and Russia have accused each other of shelling residential areas. Kiev denies that it targets civilians, while Moscow insists that it only hits military targets.

On her show on Sputnik radio on Wednesday, Zakharova said the three Baltic countries, all NATO members, have expressed “neither concern, condemnation nor at least bewilderment” over the actions of the alliance in Afghanistan, Iraq, and Yugoslavia, which led to “hundreds of thousands of casualties among the civilian population,” and to the “emergence of conflicts in places where they were not even contemplated.” 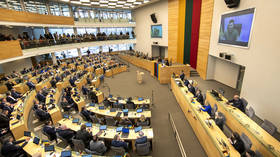 Because of this, Zakharova argued, there is no point in believing that the Lithuanian parliament’s resolution has anything to do with pacifism or with any desire “to resolve the extremely difficult situation in Ukraine.”

“This should be treated exactly as an element of provocation, extremism and political hypocrisy,” the foreign ministry spokeswoman said, adding: if Lithuania is truly concerned of the fate of Ukraine and of “its own European continent,” it should not have engaged in “provocative activities” over the last eight years, but instead care about the fate of people in Donbass and urge Kiev to observe the Minsk agreements.

If Lithuania is really concerned now, it would call for a ceasefire, oppose the supply of weapons to Kiev, and offer intermediary services, Zakharova said. “Instead, they are doing exactly the opposite.”

Russia attacked the neighboring state following Ukraine’s failure to implement the terms of the Minsk agreements, first signed in 2014, and Moscow’s eventual recognition of the Donbass republics of Donetsk and Lugansk. The German and French brokered protocols were designed to give the breakaway regions special status within the Ukrainian state.

The Kremlin has since demanded that Ukraine officially declare itself a neutral country that will never join the US-led NATO military bloc. Kiev insists that the Russian offensive was completely unprovoked and has denied claims it was planning to retake the two republics by force.