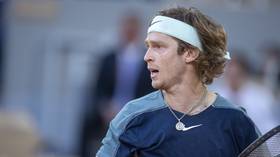 Rublev breezed past Zhang 6-3 6-2 in a contest lasting 58 minutes at the indoor hard-court showpiece.

The Russian converted three of the four break points he created, saving all three which he faced on his own serve against the Chinese world number 126.

Rublev, 24, will await the winner of the match between Greek third seed Stefanos Tsitsipas and Italy’s Luca Nardi in Thursday’s quarterfinal in Astana. 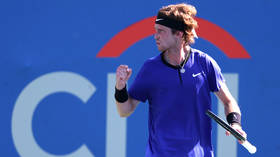 Elsewhere, the tournament boasts a stellar cast as Novak Djokovic and Russian duo Daniil Medvedev and Karen Khachanov all remain in contention.

However, current world number one Carlos Alcaraz suffered a surprise early exit when he was beaten by Belgium’s David Goffin at the start of the week.

Ranked number nine in the world, the Moscow-born Rublev is targeting a fourth ATP title of 2022 after successes on clay in Belgrade and at hard-court tournaments in Dubai and Marseille.

Rublev is also hoping to secure his spot at the season-ending ATP Finals in Turin, and currently lies in sixth place in the race for the eight tournament berths which are available.