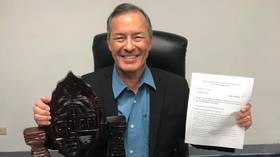 While the continental US is still voting in the midterms, the island of Guam in the western Pacific has already announced its election results, on Wednesday morning local time. Democrats have managed to hold onto the governor’s mansion and the legislature, but the territory’s non-voting delegate in the House of Representatives will be a Republican.

James Moylan received 52.19% of the vote, Pacific Daily News reported, citing Guam’s election authorities. He is only the second Republican to represent Guam in Congress since the delegate position was created in 1970. Vicente Tomas Garrido Blaz was the first, serving from 1985 to 1993.

Democrat Michael San Nicolas, the current delegate, retired to run for governor but lost the primary to Governor Lou Leon Guerrero in August.

“The island of Guam has finally flipped after all,” Human Events editor Jack Posobiec quipped after the news of Moylan’s victory. It was a reference to a 2010 viral moment during a House hearing, when Representative Hank Johnson, a Georgia Democrat, wondered if sending more US troops to the island would cause it to “tip over and capsize.”

Guam has been under American rule since 1898, when it was seized from Spain. The island has long been a major US naval base.

In Tuesday’s midterm elections, Americans are voting for all 435 seats in the US House of Representatives, 35 seats in the Senate, and the governorships of 36 out of 50 federal states.