Home Iz minuta u minut Rejecting oil and gas is ‘road to hell’ for US, big bank...

Rejecting oil and gas is ‘road to hell’ for US, big bank CEO warns 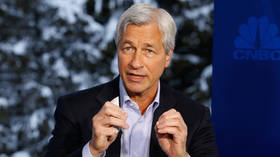 Tlaib reminded Dimon that JP Morgan, along with the other six largest banks in the US, had committed to wind down their emissions from “lending and investment activities” in order to “align with pathways to net-zero in 2050.” The only way to get there, she claimed, was to veto all fossil fuel projects going forward.

“Please answer with a simple yes or no: does your bank have any policy against funding new oil and gas projects?” the Minnesota representative asked. 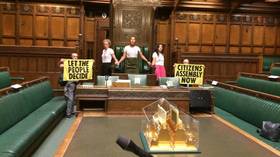 “Absolutely not – and that would be the road to hell for America,” Dimon retorted.

Tlaib called on student loan debt holders to pull their deposits in retaliation, referencing Dimon’s opposition to President Joe Biden’s controversial student loan forgiveness plan, which he had called "badly done" earlier in the six-hour marathon hearing. The bank executive wasn't just failing to help to “relieve” these customers by canceling their debts – he didn't “care about working-class people and front-line communities like ours that are facing huge amounts of high rates of asthma, respiratory issues, and so much more,” she claimed.

Three other CEOs present at the hearing followed Dimon’s lead, refusing to close the door on their oil and gas lending businesses, but added that they were also investing in renewable energy projects.

This was not enough for Tlaib, who declared: “We are living through a climate crisis today and a commitment to net zero requires a commitment to ending fossil fuel financing.”

“At the end we’re going to pay the cost of the public health impact,” she warned.

While mainstream climate science holds that averting the worst effects of climate change requires keeping global temperature under 1.5 degrees Celsius above "pre-industrial" levels, "net zero" is criticized for implying that merely offsetting emissions can keep the temperature down, allowing the producers of those emissions to continue business as usual so long as they pay their dues to the climate authorities.