Ronaldo won't be making a dramatic return to the Spanish capital 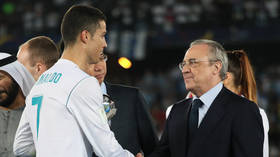 Ronaldo spent nine seasons in the colors of Real Madrid after moving to the Spanish giants in what was at the time a world record transfer, but Perez has ruled out speculation that history might repeat itself after stating that the club's all-time record goalscorer is too old to be considered an option for Carlo Ancelotti's side.

Ronaldo, who turns 38 during the upcoming season, has been agitating for a move away from Manchester United for more than a month after he informed the club of his desire to leave in pursuit of Champions League football.

But so far the multiple-time Ballon d'Or winner hasn't been able to secure a high-profile transfer away from Old Trafford as a host of Europe's elite clubs distanced themselves from a move for the veteran goalscorer.

Chelsea, Bayern Munich and Atletico Madrid have so far ruled themselves out as being Ronaldo's next destination – but perhaps none have been quite so dismissive of the Portuguese great than the club at which he enjoyed won four Champions League crowns.

Perez's blunt dismissal of the Ronaldo speculation comes amid career-best form from the club's chief marksman, Karim Benzema, who scored 44 goals last season and is the oddsmaker's favorite to be named as this year's Ballon d'Or winner.

Real Madrid's chief transfer outlay so far this summer was the reported £72 million ($87.5 million) they shelled out for French midfielder Aurelien Tchouameni, while also securing Antonio Rudiger on a free transfer from Chelsea. 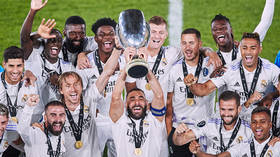 Madrid, though, are thought to be working towards lowering the average age of their squad. Benzema turns 35 shortly after the World Cup, while talismanic midfielder Luka Modric will be 37 in September; factors which make a move for Ronaldo exceptionally unattractive from an age profile point of view.

Manchester United boss Erik ten Hag, meanwhile, has stated publicly that he sees Ronaldo as being chief to his plans this season, but it is thought that the club's internal position is that Ronaldo would be available to suitors if an attractive bid is received, and if they can get his mammoth salary off the wage bill.

However, with Anthony Martial injured and Marcus Rashford linked to a transfer to Paris Saint-Germain, Ten Hag's options up front are thin and, for now at least, the marriage of convenience between club and player looks set to continue.