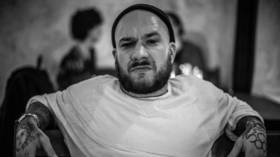 A German rapper known by the stage name Schokk on Monday sought political asylum in Russia. In a social media post, Dmitry Hinter said he faces persecution due to his public support of Russia’s special operation in Ukraine, with a “show trial” and possible prison time preventing him from returning to Germany.

“I ask for political asylum,” the rapper posted, in Russian, on his Telegram channel. “As a German citizen, I can no longer return there” after Germany allegedly opened a criminal case against him for his “public pro-Russian position” and support for the military operation, he explained.

“I publicly supported Russia in 2014 and it cost me my career. Today, I am threatened with a prison term and, I am convinced, a show trial in the German media,” Hinter added.

Charges of “approval of war crimes” were filed after editors of the BBC Russian service, Meduza and Mediazona – designated as foreign agents in Russia – “ratted” him out to the police in Saxony, Hinter told the outlet Mash.

Though he lives in Germany, Schokk raps in Russian and is a major star on the Russian music scene. He took on the stage name Schokk at the start of his “rap battle” career in 2007. He also has a “post-punk” identity as Dima Bamberg, the name under which he’s published music since 2018.

Before the 2014 coup in Kiev and the resulting turmoil in Ukraine, Schokk frequently collaborated with fellow Russian rapper Oxxxymiron, real name Miron Fyodorov. While Hinter came out in support of Russia when the hostilities escalated in February this year, Fyodorov denounced Russia and organized benefit concerts for Ukraine. Last month, Russian authorities designated Oxxxymiron as a foreign agent spreading “extremist content.”