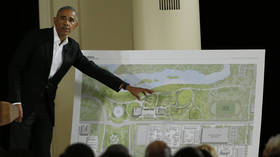 Chicago police said they have launched an investigation after a noose was found at the construction site of a building dedicated to the legacy of former US President Barack Obama and First Lady Michelle Obama.

A deliberately placed noose is considered a hate crime or a threat because of the allusions to lynching.

“Hate has no place in Illinois,” Governor J.B. Pritzker tweeted on Friday. “The noose is more than a symbol of racism, it is a heart-stopping reminder of the violence and terror inflicted on Black Americans for centuries.”

The governor condemned the incident, promising that the authorities “will make all needed resources available to help catch the perpetrators.”

The discovery at the future Obama Presidential Center was first reported by Lakeside Alliance, a team of black-owned construction companies.

“We have zero tolerance for any form of bias or hate on our worksite,” the group said in an email quoted by the Chicago Tribune. The group suspended work on the building and offered a $100,000 reward to help find those responsible.

The Obama Presidential Center will house a library and a museum, as well as function as a cultural and recreational space. Obama, the first African-American president of the US, was in office between 2009 and 2017 and attended the groundbreaking ceremony last year.