A newspaper has been hit with accusations of Islamophobia 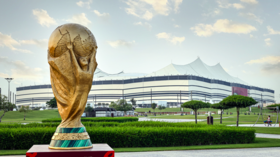 One character appears to be holding explosives, while others are adorned with balaclavas and other terrorist paraphernalia.

The image, which was published in Le Canard enchaine’s October issue, coincides with Qatar hosting this month’s World Cup, a situation which has been met with significant global opposition given accusations of abuses involving migrant workers and a hardline stance on LGBTQ issues within the Gulf nation.

“A special issue issued by the French newspaper… about Qatar,” wrote one furious commenter on Twitter. “You cannot imagine the extent of the hidden French hatred, contempt and insult to Qatar, its people, its government and its symbols. I wonder why the Qatari ambassador is still in Paris???!!!”

Reacting to the image, Hamad Al-Kawari, who is the president of Qatar’s National Library, tweeted that France should show “a little sportsmanship” in advance of the tournament and suggested that the publication was engaging in “lies, hatred and grudges.”

“Even caustic satire is welcome!!!” he wrote. “But the Canard enchaine decided to resort to lies, hatred and grudges to attack Qatar and denigrate it.”

Numerous figures within France have vocally opposed the decision to award the World Cup to Qatar, while Parisian authorities recently announced that they would not show World Cup matches in so-called fan zones, citing concerns about Qatar’s involvement in the event.

France’s top club team, Paris Saint-Germain, is owned by Nasser Al-Khelaifi, who is the chairman of Qatar Sports Investments and the beIN media group.

Such criticism led to Qatar’s Emir Sheikh Tamim bin Hamad Al Thani to last month hit out at what he claimed was an “unprecedented campaign” designed to denigrate the Gulf state.

“It became clear to us that the campaign continues, expands and includes fabrication and double standards, until it reached a level of ferocity that made many question, unfortunately, the real reasons and motives behind this campaign,” he said.

Watchdogs such as the International Labour Organization (ILO) have said strides had been made to improve labor relations in Qatar, news which was welcomed in the state, but added that there remains work to be done to ensure that migrant workers are treated in a fully fair and ethical manner.

It is estimated that workers such as these comprise as much as 85% of Qatar’s population.