Psaki to appear on MSNBC this fall 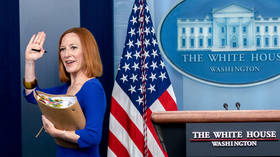 Former White House Press Secretary Jen Psaki will cover this year’s midterm elections on MSNBC, the network announced on Tuesday. Psaki is the latest in a long line of government officials, cops, and spies to land TV spots after leaving Washington.

Psaki left the White House earlier this month amid rumors that a deal between herself and MSNBC was in the works. Although MSNBC employees reportedly feared that such an agreement would “tarnish” the network’s supposedly non-biased image, the deal went through and was announced by MSNBC President Rashida Jones on Tuesday.

In a statement, Jones said that the network chose Psaki for her “extensive experience in government and on the campaign trail and perspective as a White House and Washington insider.”

“She’s a familiar face and trusted authority to MSNBC viewers, and we look forward to her insight during this consequential election season,” Jones continued. 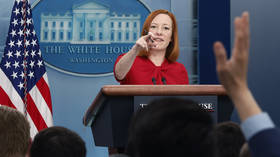 In addition to her upcoming work as a political commentator, Psaki will host her own show on Peacock, MSNBC’s streaming service, as of early 2023.

Psaki is hardly a trailblazer for departing Washington for a career in cable news. MSNBC has employed a host of prominent officials as commentators, particularly those who worked for the US’ law enforcement and espionage agencies. These include former CIA director John Brennan, former acting DEA director Chuck Rosenberg, and former FBI assistant director Frank Figliuzzi.

David Axelrod, a former advisor to Barack Obama, found work at MSNBC after leaving the White House, as did Robert Gibbs, President Obama’s first press secretary and Psaki’s boss between 2009 and 2011. The pipeline flows both ways too, with Psaki’s replacement in the White House, Karinne Jean-Pierre, having previously worked as a political analyst at the network in between stints in the Obama and Biden campaigns.

MSNBC is not the only network to snap up former White House spokespeople. Two months after Donald Trump left office last year, Fox News hired his last press secretary, Kayleigh McEnany, as a contributor. Nor is MSNBC the only network to hire extensively from the intelligence agencies of Democratic administrations.

In recent years, CNN has counted former director of National Intelligence James Clapper, former CIA and NSA director Michael Hayden, and former FBI deputy director Andrew McCabe as commentators, among others. Like those at MSNBC, the former officials at CNN often find their way back into government. Antony Blinken was a CNN contributor after serving as Obama’s deputy national security advisor, and is now Biden’s secretary of state. Samantha Vinograd served on Obama’s National Security Council before moving on to CNN, and then returning to Washington as a senior member of Biden’s Department of Homeland Security.

In a statement on her move to MSNBC, Psaki said that her contributions to the network would be directly influenced by her time in the Biden administration. “My time in government, from the White House to the State Department, and years before that on national political campaigns, will fuel the insight and perspective I bring to this next chapter,” she said.