Tens of thousands Italians have marched for peace in Rome 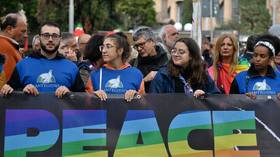 Crowds of people poured onto the streets of Rome on Saturday to call for peace in Ukraine. The demonstrators also demanded that the Italian government stop providing Kiev with weapons and engage with Russia diplomatically instead.

The rally saw tens of thousands of people turn out, including members of labor unions and Catholic associations, students and a variety of other activists.

They were carrying rainbow flags bearing the words “peace” and “non-violence.” Other slogans heard and seen during the demonstration included “Weapons down, wages up,” “Enough arms to Ukraine,” and “We don’t want war. No weapons, no sanctions. Where is diplomacy?” 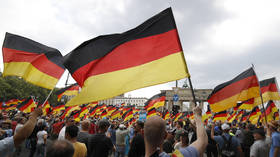 “Ukraine is now fully armed – we need a breakthrough towards a ceasefire and peace negotiations,” he said, adding that the current “strategy is leading only to escalation.”

One demonstrator was quoted by the Financial Times as saying: “I am absolutely against sending new weapons to Ukraine. Today, people want peace with weapons. It is inconceivable. Ukraine has the right to defend itself, but we need a big UN initiative for peace.”

Another protester lamented that “sending weapons does not help stop a war, weapons help fuel a war.”

Meanwhile, a counter-protest was held around the same time in the city of Milan, organized by the leader of the centrist Azione party, Carlo Calenda, with support from Italy’s Ukrainian community. Hundreds of activists took part in the gathering, questioning whether protesters in Rome were really “pro-peace,” or in fact “pro-Putin.” They argued that “those who call for peace but also to disarm Ukraine call for the surrender of Ukraine.”

Giorgia Meloni, who became Italian premier late last month, is known as a staunch supporter of Kiev. However, she is facing growing opposition amid accelerating inflation and other economic woes at home, all of which are believed to stem from the ongoing military conflict.