Protesters heckle Liz Truss on cost of living and climate

UK Foreign Secretary Liz Truss, one of the final two candidates to replace Boris Johnson as prime minister, was interrupted during a speech by climate activists who claimed she has “no credible plan” to tackle rising fuel costs.

As Truss made her opening remarks during a Conservative Party campaign event in Eastbourne on Thursday, several activists rose from their seats shouting “you should be ashamed of yourself.”

As the first activist was led away by security, another rose and accused Truss of having “no credible plan to tackle the biggest issues of our time.”

“What you’ve announced won’t come close to helping people with energy bills over 3,000 pounds a year.”

Fuel costs in the UK have soared to record highs, as inflation is predicted to reach 11% by the end of this year. While costs had been trending upwards since the end of the coronavirus pandemic, fuel prices in particular spiked in the months after the UK voluntarily cut itself off from imports of Russian oil and gas in response to Moscow’s military operation in Ukraine.

Annual household bills are expected to surpass £3,300 ($3,971) this winter, according to energy consultant Cornwall Insight. Truss has pledged to fight this increase with a combination of tax cuts and rollbacks in environmental levies, but warned the public on Friday that the UK is facing “a tough winter.” 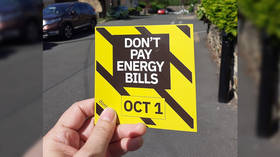 The activists, however, are calling for a ‘Green New Deal,’ a bill that would see the UK commit to “making fossil fuel extraction a thing of the past” and “decarbonize” its agriculture, industry, and economy. Critics have argued that these measures would result in higher energy costs at best and widespread poverty and starvation at worst.

Truss resumed her speech with a promise to “legislate immediately to make sure that we are standing up to militant trade unions, who stop ordinary commuters getting into work” and make sure “that militant activists such as Extinction Rebellion are not able to disrupt ordinary people who work hard,” referring to the climate protesters famed for disrupting traffic and gluing themselves to trains.

“I will never ever, ever allow our democracy to be disrupted by unfair protests,” Truss declared.

Truss is currently running against former Chancellor of the Exchequer Rishi Sunak to succeed Boris Johnson as leader of the Conservative Party and prime minister of the UK. Truss, a supporter of Thatcher-like spending cuts at home and harsh opposition to Russia abroad, is currently polling 26 points ahead of Sunak, according to a compilation of polls by Politico.