Protester files police report after being floored by NFL star 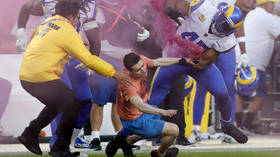 Star NFL player Bobby Wagner says he isn’t concerned by a police report filed against him by an animal rights protester who felt the full force of the All-Pro linebacker’s tackling skills on Monday night.

Los Angeles Rams star Wagner, who is considered to be among the finest defensive players in the NFL, said that he was merely assisting the security staff at Levi’s Stadium towards the end of the second quarter of his team’s 24-9 defeat to the San Francisco 49ers when he tackled a protester to the ground close to the sidelines, after the man had invaded the field carrying what appeared to be a pink flare.

The thunderous hit from the 240lb player sent the unsuspecting protester smashing into the turf, with the force of the collision leaving a noticeable divot on the ground.

The pitch invader was subsequently collared by security and led away.

It was later reported that the protester was involved with the Direct Action Everywhere group, and that he was attempting to garner attention to an ongoing trial related to the theft of piglets from a factory farm.

Prior to his invasion of the field, another protester had attempted to interrupt the game but was stopped by security.

Despite being the toast of the NFL Twittersphere for his interjection, it has been confirmed by the Santa Clara Police Department that an official complaint was made against Wagner on Tuesday, with the player confirming to the media on Wednesday that he was aware of the legal proceedings against him.

“Can't really focus on it,” Wagner said of the police report.

“I'm more concerned about the security guard that was hurt trying to chase him. You just got to do what you got to do.”

Wagner also added that in situations where a fan invades the field of play, the situation must be brought under control immediately amid potential fears that the protestor could be carrying a weapon.

And while the NFL is often mired in legal complaints against players from its 32 clubs, Rams head coach Sean McVay said that there is no question that Wagner will receive the full backing from the entire organization in Los Angeles.

“I think that we all know where Bobby’s intentions were,” McVay told the media Wednesday when probed about the police involvement in the situation.

“And I support Bobby Wagner,” he added. “That’s where I'm at with that. I don’t think anybody will disagree.” 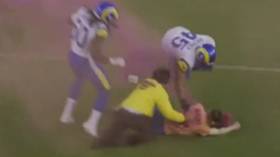 Podcaster and former NFL player Pat McAfee also gave his thoughts on the matter this week, saying that Wagner should be considered a “hero” for his interjection.

“A lot of folks saying that the protestor… who illegally hopped on the field with a smoking stick… is gonna sue Bobby Wagner??” McAfee wrote on Twitter.

“How does anybody know what else that person has? They have a smoke stick in one hand, who knows what in the other… Bobby’s a hero. End of story.”

Wagner’s Rams teammate Greg Gaines agreed: “I was scared for my life, he could have had a bomb, Bobby Wagner saved our lives.”