Patrick Vieira didn't back down during another rowdy pitch invasion 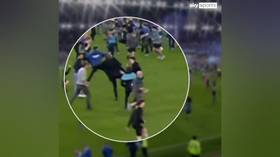 Arsenal icon and current Crystal Palace manager Patrick Vieira has lashed out at a fan that taunted him during another controversial pitch invasion in English football.

Tuesday saw Nottingham Forest fans storm the City Ground pitch after their team beat Sheffield United in a Championship semi-final playoff penalty shootout, with one of their number jailed for six months for assaulting United captain Billy Sharp while his teammate Oli McBurnie is being investigated for allegedly stamping on a grounded Forest supporter.

On Thursday night, similar scenes played out at Goodison Park as Everton secured their survival in the Premier League by beating Crystal Palace 3-2.

At full time, Toffees fans stormed onto the turf to celebrate the landmark victory and one made the error of confronting Palace's boss in legendary hardman Vieira, who is famous for his battles with Roy Keane at the height of an Arsenal-Manchester United rivalry in the late 90s and early 2000s.

In a clip that has been widely shared on social media and seen more than five million times, France '98 World Cup winner Vieira is unaccompanied by security or staff as he heads towards the away dressing room when a fan makes a gesture in his face.

First grabbing the man, 6ft 3in Vieira then swings a kick at him before other Everton supporters step in and usher the former defensive midfielder away for his own good.

Vieira is yet to comment on the incident, but is certain to receive a fine for it if the Football Association investigates.

Defending his corner, however, opposite number and Everton boss Frank Lampard said: "I feel for Patrick. I didn’t get him at the end."

"I would have said: ‘Come in with us,’ although he might not have wanted that. Of course, he ran 80 yards across the pitch and it’s not easy," Lampard added. 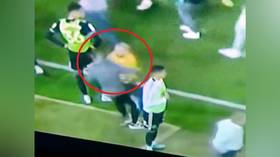 Regarding the pitch invasion, Lampard put it down to the "pure elation of fans who have come on the pitch after avoiding relegation".

"If it is done in the right way, let them stay on the pitch, let them have their moment. As long as they behave, no problem," he insisted.

Another skirmish on Merseyside that has done the rounds on Twitter sees an Everton-supporting granny verbally abusing Palace defender Joachim Andersen during a tussle at a throw in by telling him to "f*ck off", and then slapping him on the backside.

Also on the platform, Everton striker Richarlison called out ex-Liverpool center back Jamie Carragher, who is said to have been an Everton fan as a youth.

"Honestly, get up, every week I watch him play like that," Carragher previously criticized the Brazilian as he fell to the ground during a recent Merseyside derby.

"Get up, carry on. He's been down three times already, [there's] nothing wrong with him," Carragher protested.

Tagging 'Carra' after his side beat the drop, however, Richarlison addressed the Sky Sports analyst and ordered him to "wash your mouth before you talk about me and Everton".

"And I don't respect you," Richarlison emphasized, along with a poo emoji.

Being a good sport, Carragher quote-tweeted Richarlison and confessed: "I actually quite like this."

"If Twitter was about when I was a player I’m sure I would’ve called pundits out quite a lot!!" he concluded.