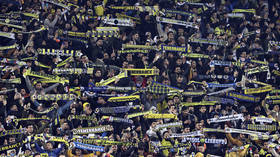 Fenerbahce fans will "feel what Russophobia is" as UEFA investigates them for chants they made during a match with Dynamo Kiev, according to Russian State Duma Deputy Dmitry Svishchev.

UEFA announced on Thursday that it is looking into "alleged misbehavior" of supporters of the Istanbul club after they chanted Russian President Vladimir Putin's name during a 2-1 defeat to Dynamo in a Champions League qualifying tie at their Ulker Stadium on Wednesday evening.

Reacting to the news, Russian politician Svishchev suggested to Match that people in the stadium "were just expressing their emotions, perhaps towards their idol."

"In addition [to this], no one insulted anyone, unlike the match at the European Futsal Championship, where Ukrainian fans allowed themselves [to make] obscene expressions," Svishchev added.

The politician was referring to a 3-2 win for Russia against Ukraine at the Ziggo Dome in Amsterdam earlier this year, where Ukrainian fans were heard singing derogatory chants about Putin and Russophobic songs during the futsal Euro 2022 clash. 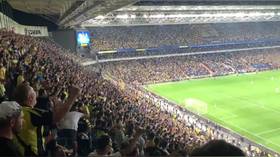 "Now, what can I say? Turkish fans, unfortunately, will also feel for themselves what Russophobia is," Svishchev predicted.

"UEFA decided that it was not enough for them to discriminate against Russia. In addition, we have still not seen the results of the investigation into the incident from the futsal match. It is not clear what UEFA has been doing there for six months, [and] why there is still no punishment," Svishchev added.

Following UEFA's announcement, Fenerbahce made a statement "against a discourse that does not represent our club and does not reflect our club's corporate stance in any way."

Fenerbahce insisted that it always takes care to "raise awareness on social and humanitarian issues both in our country and [around] the world within our sphere of influence."

It also pointed out that it was the first club to react when Russia's military operation in Ukraine began in late February and again condemned it.

Fenerbahce addressed the alleged incident directly, and noted how in the 57th minute, when Dynamo midfielder Vitaly Buyalsky put the Ukrainian team 1-0 ahead, "some of the opposing team's players, especially the reserve goalkeepers who played for a team in our country in the past, caused some [sections] of the stands to get excited" and transmit a reaction that "lasted only 20 seconds in the 120-minute match."

"Whatever the reason may be, we, as Fenerbahce Sports Club, do not accept the reaction that arose from some [sections] of our stands," the club continued.

"It is not a fair and equitable approach to attribute this discourse, which never represents the stance and values ​​of our club, to all our fans and to attribute responsibility to our club."

Unlike Fenerbahce, UEFA did not mention the chants specifically, which are said to have broken out after Buyalsky celebrated his opener ferociously while making a "provocative gesture" towards the home side's fans.

In response, sections of the Ulker Stadium are said to have chanted President Putin's name in unison, which social media footage also clearly shows.

Fenerbahce supporters were already emotional ahead of the goal given that one of their men was sent off shortly before Buyalsky struck.

Less than a quarter of an hour later, Enner Valencia then fluffed the chance to equalize by missing a penalty, but Attila Szalai managed to force extra in the dying minutes with a late leveler. 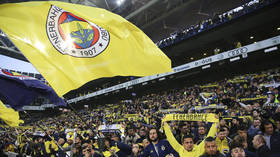 Dynamo eventually prevailed over their 10-men opposition when Alexander Karavayev scored a winner with 114 minutes on the clock to make it 2-1.

As a consequence, the Ukrainians will now face Sturm Graz on Wednesday in the first of two legs in the Champions League qualifying third round, and Fenerbahce must overcome Slovacko over two matches in the third round in order to qualify for the inferior Europa League.

Punishment from UEFA could come in the way of Fenerbahce playing the first leg behind closed doors at home or Slovacko being given a bye.

Considering that UEFA completely banned Russian teams and clubs from international competitions when acting on an International Olympic Committee (IOC) recommendation earlier this year, sanctions against Fenerbahce could be swift and harsh.